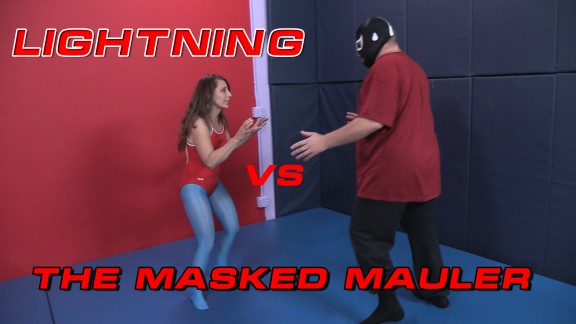 Lightning goes up against the Masked Mauler but as fans of Lightning know she is no slouch when it comes to bringing the action and the pain!
She puts the much bigger brute through his paces and even get's a couple of KO's out of him, teasing him with her stinky feet!
But soon the tide starts to turn and it's the Masked Mauler who is soon getting the upper hand, knocking out the wrestling beauty with a sleeperhold.
Lightning still has some fight left in her so the Masked Mauler attempts to squeeze that life out of her with first a rear bearhug and then a frontal bearhug to end the match.

The Masked Mauler then does an size comparison of Lightnings tiny feet to his big hands and ends the match by dragging her limp body around the ring.
Apparently, Lightning vows revenge!

Sleeper, Rear and Front Bearhugs and lots of feet action in this one!